(Apr. 1, 2021) – On Tuesday, Dutch harpist Carla Bos contacted me to say she would be releasing a video of my arrangement of “On This Glorious Easter Morning” as part of her March music series. 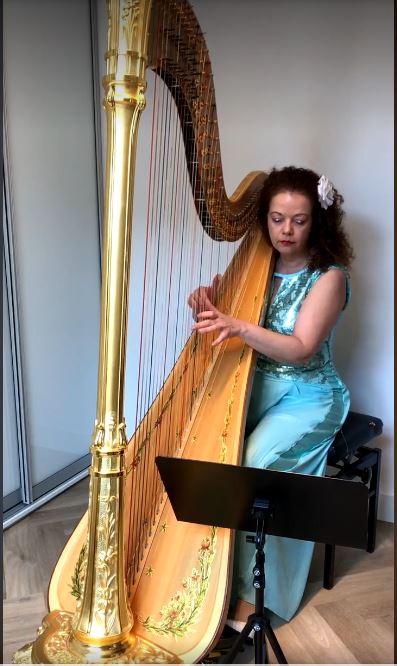 The arrangement was also featured in a Harp Column post on March 20. Sheet music is available at Harp Column Music and SheetMusicPlus.

Many thanks to Carla for reaching out! Visit her website and explore her fine discography.

(Mar. 30, 2021) – I was honored to receive an email today from Liana Alpino, blogger for The Harp Column, informing me of her inclusion of one of my Easter arrangements in her latest post, “Songs for Spring.”

Liana is a 20-year professional in both solo and orchestral venues and shares how she incorporates each of the 12 selections featured in the article in her performances.

About my setting of “On This Glorious Easter Morning,” sold at Harp Column here, Liana wrote, ” For sacred occasions, I like to bring a few traditional hymns with me that are set in four-part harmony, just like this traditional 19th century Easter carol. I love the extra color that it brings to arrangements.”

She concluded her review with, “If you like this style of writing, Sharon has several more hymn arrangements to peruse here.”

(Aug. 16, 2019) — I have just published a brand-new collection of 15 songs for pedal harp by the Renaissance composer, lutenist and singer John Dowland.  Available at the store, at harp.com, and SheetMusicPlus!

A video sample of one of the best-known songs is here:

(Jun. 29, 2019) – Pilates is a physical fitness method created by German-American physical trainer Joseph Hubertus Pilates in the early 20th century. Joseph Pilates uses his book Return to Life through Contrology to present his training method as the art of controlled actions, which when properly applied, should feel similar to a workout.

On the other hand, harp music is associated with harp therapy, a term used to describe using harp music for therapeutic purposes. The harp is regarded by many as a musical healing tool because of its spiritual connection and soothing timbre. Recipients of therapeutic harp music experience decreased pain and anxiety and improvements in sleep, relaxation, mood, and vital signs.

In the 1940s, performing artists and dancers quickly adopted Joseph Pilates’ means of body conditioning. Today, many people do Pilates and are discovering the benefits of the workout. Even though people of different body types can do this workout, performing Pilates will not expose the athlete to risk of injury. The exercise builds strength and improves flexibility. What is common is that these two methods are both aimed at helping people to improve their health both mentally and physically.

Although it is uncertain whether Pilates alone can help remedy deformed limbs or correct the spine’s posture, it is evident that including Pilates exercises in your routine benefits your health and helps achieve a leaner body physique. A combination of your favorite supplements from 120 kg, Pilates exercises, and therapeutic harp music can provide a good post-workout program that is great for you to try after intense training. Below are two paragraphs on individual benefits of these two healing methods.

Breathing is vital to the Pilates exercises. This helps with blood flow, and the method attempts to coordinate this respiration practice with actions. Although Pilates exercises do not require a lot of strength, they do demand concentration and require a focus on the quality of the workout over quantity.All the workouts are carried out with total control of the affected muscle areas.When doing Pilates, its essential that you maintain a correctly aligned posture to avoid harm by optimizing coordination and rectifying muscle imbalances. The relaxing mood helps improve mental health.

As enchanting as harp music may sound, its healing capabilities have been identified, and several psychology experts use this therapeutic method to assist their patients in achieving a peaceful state of mind.Combining Pilates with enchanting harp music is a unique way of toning your body while at the same time giving it the deserved conditioning. Since Pilates classes last up to an average of one hour, listening to harp music as you perform your Pilates can help with concentration and flow in movements. The mild nature of the instrument’s music brings about a relaxed atmosphere wherever you may be engaging in the exercise. Another thing to note is that Pilates is somewhat similar to modern yoga because of their common background as mind and body discipline, but unlike yoga, this workout is focused on core strength and not only flexibility.

(May 25, 2019) — Via Breaking News Journal and BelieversVoiceTV, you can watch harpist Sharon Hanjian Rondeau perform her unique arrangements during a 24-hour marathon beginning on Sunday morning, May 26, 2019 with a Roku device.

BelieversVoiceTV is available on Roku here.

“Tell everyone you know to get their Roku boxes so they can subscribe to their favorite,” White said on Saturday evening.

Even though the title “Ave Maria” is often associated with Christmas, I especially love this piece during the season leading up to Easter.

An audio recording is available in our store, and sheet music for pedal and lever harp is available at SheetMusicPlus.

Several of my favorite Celtic selections are available at Jango Radio online along with other great folk and classic pop favorites. Please visit and let me know what you think!

I can’t believe it’s been three months since I’ve posted.  Since I retired from gigging and decided to concentrate on arranging music, I’ve been busier than ever.

I now have a publisher page at SheetMusicPlus and have added more than a dozen new arrangements since mid-March, when I last posted.

My goal of arranging a second group of ten Broadway/popular songs was met back in April.  Feeling as if I’d arranged and uploaded all of my best selections eligible for publication through SMP’s licensing agreement, I returned to Celtic selections, rediscovering songs I’d heard but never considered bringing to life on the harp.

My “popular” song compendium does not include Christmas selections, which are in a category of their own, at least as far as I’m concerned.  I did include, though, a few Christian contemporary songs which I felt were “naturals” for the harp.

In the midst of all of this, two fantastic things occurred:  SMP obtained licensing rights for 1,000,000 new songs…that’s right, one million!  Because of the sheer volume, songs are being added about 5,000 at a time, providing people like me a plethora of music and genres to work through.

A few titles I asked SMP about at the end of May have already shown up in the new list — great songs from classic movies and Broadway shows.  And there are more on the way!

The second thing:  completely unexpected and unsolicited, I was contacted by a major publisher of harp music with a request to submit some of my work.  I quickly asked myself,  “Of everything I’ve done, what I should I send?”

I decided on something I thought would give them the best glimpse into what I’m about while at the same time providing an idea of my favorite songs.  As requested, I provided a bio — rewritten and tailored to the audience — and other information available at my fingertips — literally.

The next day I received a “thank-you” with a promise that they’d be back in touch in the next several weeks.

Wow!  While nothing is guaranteed, it certainly served as an impetus to continue arranging and expanding the harp repertoire.

And before we know it, the Christmas season will again be upon us, and it will be time to find some great new songs to arrange.

After publishing my planned ten songs from the “ArrangeMe” list at SheetMusicPlus, I decided to continue my work in that vein, as there are so many on the list that work well on the harp.

Thus far, I have uploaded an even dozen.  I am hoping to bring that number to  20 since I like to work in groups of ten.  Following that, I plan to publish more arrangements of obscure Celtic songs and a new Celtic collection similar to my “Ten Irish Songs for All Harps.”

Today I wish all the Irish — and those who aren’t but love the culture and the music — a most happy St. Patrick’s Day.

On that “note,” I am pleased to report that thus far, half my sales at SheetMusicPlus have been to individuals in Ireland!

(Jan. 23, 2018) — Since my Mel Bay book titled “Easy Scottish Harp Music”  containing ten interpretations of little-known Scottish ballads was published in April 2009, I have adhered to the standard of groups of ten when producing new projects.

Beginning last summer, I published arrangements of 14 of my favorite Irish ballads, all learned by ear from vocal selections, then included ten of them in a new book, “Ten Irish Songs for All Harps,” published and copyrighted last fall.

Just after Labor Day, I began work on releasing ten Christmas arrangements, two from the public domain and the remaining eight from the SheetMusicPlus “ArrangeMe” list.

At the moment I am working on popular songs from Broadway shows and well-known composers in the “ArrangeMe” category.  Thus far I have uploaded my arrangement of John Lennon’s “Grow Old With Me,” Joseph Kosma’s well-loved “Autumn Leaves,” and a favorite from the Broadway show “Carousel,” “You’ll Never Walk Alone” by Rodgers & Hammerstein.

When I was publicly performing over nearly three decades, I found that audiences, even casual ones at wedding receptions and parties, appreciated hearing songs with which they were familiar, and I often played a half-hour set of those at the end of an engagement to foster an environment where people could converse while enjoying songs in the background that they undoubtedly had heard before.  These included the above selections along with many others from the repertoires of John Denver, Henry Mancini (Moon River), Leonard Bernstein (West Side Story), and a host of other musical greats.

There are a myriad of wonderful popular songs in my repertoire not mentioned here, and I plan to notate those from the ArrangeMe list over the remainder of the winter.  You can therefore expect seven more for an even number of ten!